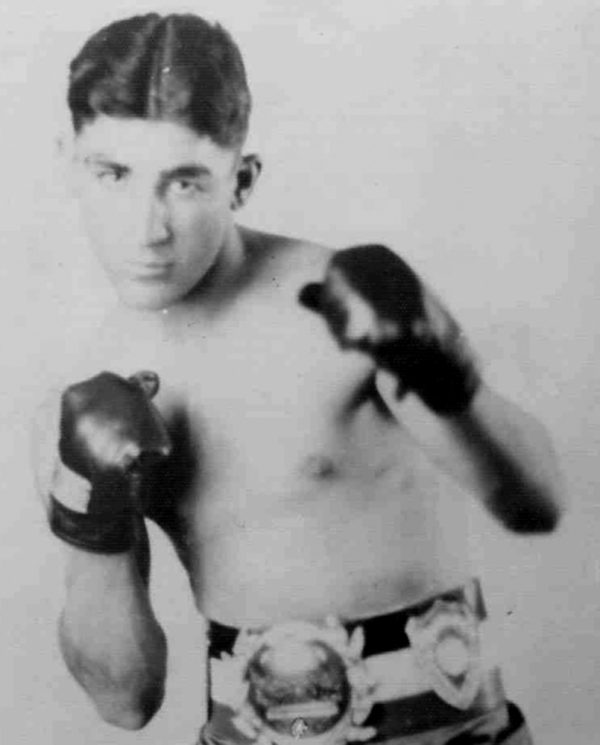 Born Christopher Battaglia on February 18, 1908 in Hartford, CT, Battalino won the 1927 National AAU featherweight championship. He made his pro debut later that same year and within two years would reign as world champion.

On July 26, 1929 he met bantamweight champion “Panama” Al Brown and scored a 10-round win that took him from relative obscurity to the world stage. His next bout was a featherweight title go with Frenchman Andre Routis at Hartford’s Hurley Stadium. In front of 25,000 spectators the 21-year old Battalino defeated Routis over 15 rounds to win the world title. Prior to his first title defense he engaged in several non-title bouts including a loss and a win to Charles “Bud” Taylor and Bushy Graham respectively. In 1930 he successfully defended his crown over Ignacio Fernandez, avenged his loss to Taylor, lost to “Kid” Kaplan and closed out the year with a 15-round title defense over Hall of Famer Kid Chocolate. 1931 saw three more title defenses over Earl Mastro (W10) and Hall of Famers Fidel LaBarba (W15) and Freddie Miller (W10). He also split two more bouts with Graham (L10, KO1) and registered a TKO win over Al Singer.

Battalino’s title reign came to a close in 1932 following a controversial title bout with Miller. He vacated the belt and moved up in weight to campaign as a lightweight. As a lightweight, he lost bouts with Hall of Famers Billy Petrolle (TKO by 12, L10) and Barney Ross (L10) and continued to box until 1940.

Known as a courageous and rugged fighter with good inside boxing abilities, Battalino retired with a 57-26-3-1NC (23KOs) record. He died in Hartford, CT on July 25, 1977.

Giulio Gallucci, better known as Johnny Duke, grew up in the North End of Hartford. Duke was introduced to boxing by legendary champion Willie Pep when they were both shoeshine boys in downtown Hartford. Duke joined a gym and became a sparring partner for Pep. Duke also trained at Stillman’s Gym in New York alongside boxers such as Sugar Ray Robinson and Henry Armstrong. He was 23-21-4 under his birth name, and also fought a handful of fights at the end of his career as Johnny Duke. He picked the name “Duke” for his well tailored suits and sharp dress.

Duke was a manager at the Bellevue Square Boys Club during the 1960s and 1970s. His connection to the multicultural North End of Hartford earned him a job with the city acting as a go-between for the cops. Bellevue Square boxers dominated the Western Massachusetts Golden Gloves tournaments for several years. That tournament is now called the Western New England Golden Gloves.

Jim Jedrziewski was so captivated by Duke’s stories that he decided to write a biography of the Hartford boxing coach and trainer. The book, No Pretender Johnny Duke: an American Original, was published in 2003.

Born October 15, 1901 in Kiev, Russia, Kaplan and his family emigrated to the United States when he was five years old and settled in Meriden, CT. He began boxing as a teenager at the Lenox A.C. in Meriden and turned professional in 1919. A busy fighter, he engaged in over 50 bouts in his first 4 years in the paid ranks. In 1923 he twice drew with rival Babe Herman before scoring a 10-round win over future world lightweight champ Jimmy Goodrich.

By late 1924 featherweight champion Johnny Dundee vacated his title and a tournament was arranged to determine a successor. “Kid” kayoed Angel Diaz in three stanzas, outpointed Bobby Garcia over 10-rounds and then halted Joe Lombardo in four rounds to advance to the finals. On January 2, 1925 he knocked out Danny Kramer in nine rounds at Madison Square Garden to become the new champion. His first two defenses were against the familiar Babe Herman (D15 and W15) in late 1925. Kaplan next decisioned Hall of Famer Billy Petrolle over 12 rounds in a non-title bout.

However, Kaplan’s reign as champion was nearing its end. Despite standing 5ft 4 in. he was experiencing difficulty making the featherweight limit and decided to relinquish the crown to campaign as a lightweight in 1927. As a 135-pounder, he scored wins over Jackie Fields, Johnny Jadick, Billy Wallace, Joe Glick Goodrich, Battling Battalino and Sammy Mandell among others. Amongst the wins were loses to Wallace, Eddie Ran, and Hall of Famer Jimmy McLarnin. In 1933 he lost to Cocoa Kid and promptly retired from the ring with a 104-18-12D- 19 ND (25KOs) record.

Known as a rugged, pressing boxer who possessed tremendous stamina, the crowd-pleasing “Meriden Buzzsaw” died on October 26, 1970 in Norwich, CT. 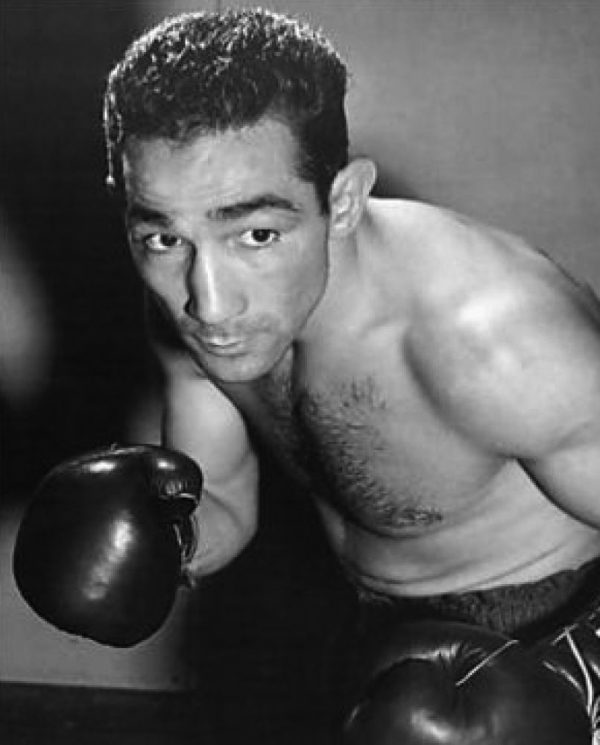 Nicknamed “WILL o’ the Wisp,” for his elusiveness, Pep is one of boxing’s all-time great artists. Legend has it that Willie once won a round without throwing a punch.

Pep held the featherweight title for six years and outboxed all comers. He is best remembered for his physical four-fight series against fellow Hall of Famer Sandy Saddler.

He turned pro in 1940 and won his first 63 fights. In 1942, he won the featherweight title by decisioning Chalky Wright. His first loss came the following year when he dropped a non-title fight to former lightweight champion Sammy Angott.

Pep retained his crown — beating the likes of Sal Bartolo, Wright and Phil Terranova — until losing to Saddler in 1948. Pep regained the title by decisioning Saddler in a rematch four months later. He managed to keep the title by making defenses against Eddie Compo, Charley Riley, and Ray Famechon. But a third match with Saddler was inevitable. When they met again, in 1950, Saddler regained the crown with an eighth-round knockout. The two legends would meet one more time on 1951 and Saddler scored ninth-round knockout.

Pep continued fighting until 1959 and beat such notables as Willie Roache, Charles (Cabey) Lewis, Spider Armstrong, Joey Peralta, and world champions Manuel Ortiz and Paddy DeMarco. He returned to boxing briefly in 1965 but retired again in 1966 after losing six-round decision against Calvin Woodland. 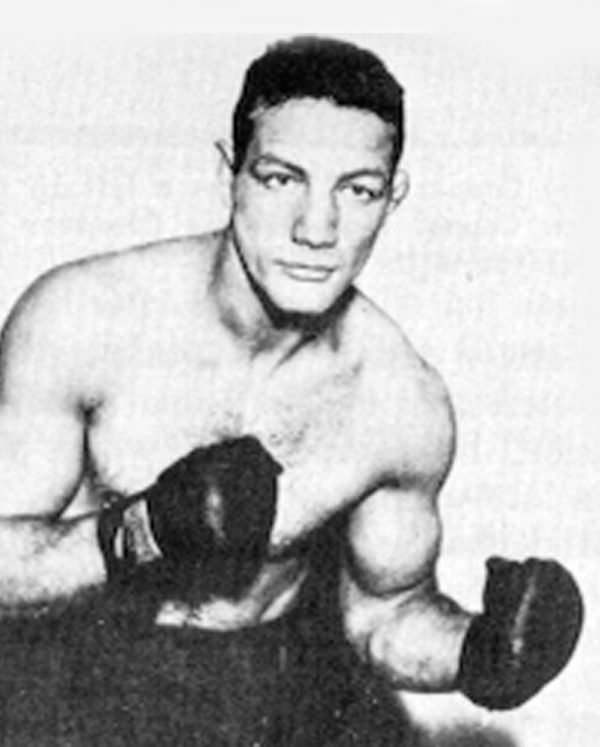 Few fighters stepped into the ring more often than Maxie Rosenbloom, who fought 299 times in sixteen years. Raised on the Lower East Side of New York, Rosenbloom left school after third grade and later served time in reform school. Reportedly, actor George Raft spotted the young Rosenbloom in a street brawl and advised him to become a boxer. Rosenbloom had an unusual style. He was a weak puncher and often slapped at his opponents with an open hand-earning him the nickname “Slapsie”-but he was a consummate defensive fighter and did whatever was necessary to avoid getting hit. He won the vast majority of his fights, although he only recorded nineteen knockouts in his entire professional career.

Rosenbloom turned pro at the age of nineteen and quickly became ranked as a contender, placing tenth in the 1925 annual rankings by The Ring. In 1927, Rosenbloom faced Jimmy Slattery-who had already beaten him twice-for the vacant NBA light heavyweight title. Slattery again won the decision. Over the next couple of years, Rosenbloom kept up a rigorous schedule, battling 46 times in 1928 and 1929.

In 1930, Rosenbloom again faced Slattery in a title fight. Rosenbloom took the decision in fifteen rounds and won the world light heavyweight championship, as recognized by the New York State Athletic Commission. Most ring experts considered Rosenbloom the best light heavy-weight in the game, and he was acclaimed as the undisputed champion when he defeated Lou Scozza in July of 1932.

Rosenbloom held the title until 1934, when he lost a decision to Bob Olin, although many sports writers at ringside believed Rosenbloom had won. Along the way, Rosenbloom fought John Henry Lewis, winning three of their five matches. Rosenbloom had a reputation of fighting just about anyone who would get in the ring with him. He once asked for a match with Joe Louis. As the story goes, Louis was confident of winning but declined because he feared Rosenbloom would make him look bad.

A lively character, Rosenbloom didn’t devote much time to training. Although he stayed away from alcohol, he enjoyed gambling, the company of women, and late night celebrations. Rosenbloom parlayed his colorful reputation into a successful acting and night club career, often portraying a punch-drunk fighter. 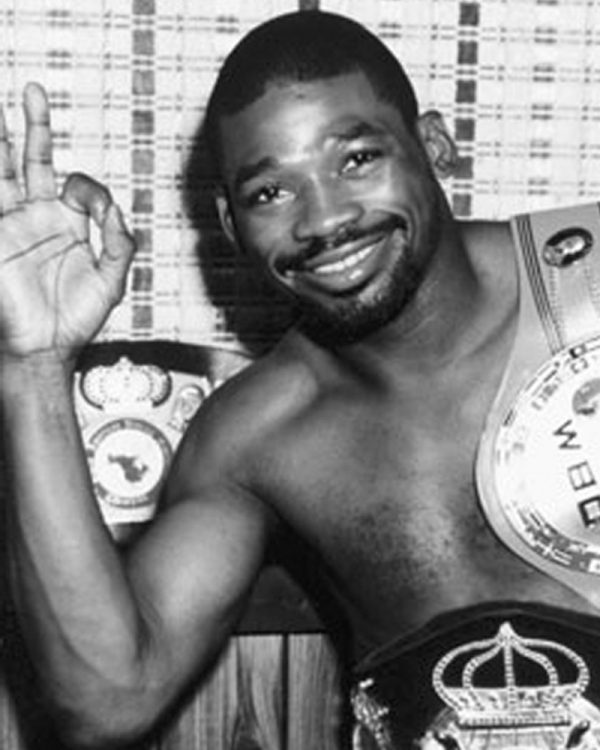 Starling was born in Hartford, Connecticut in 1959. He got his start with help from coach, Johnny Duke, who helped him train for the national Junior Olympics championship. He turned professional in 1979. After 25 straight wins to start his professional career, he lost his first fight, a 12-round split-decision to Donald Curry in 1982. Starling had a rematch with Curry in 1984, challenging for the WBA and IBF welterweight titles. Starling lost by a 15-round decision. Starling’s fighting style features what is referred to as a high guard.

Starling’s second world title fight came in 1987. He knocked out Mark Breland in the 11th round to win the WBA welterweight title. In his third title defense, Starling lost the title in controversial fashion to Tomas Molinares. Molinares hit Starling with a punch that was thrown around the same time as the bell sounded to end round six. Starling went down for the only time in his career, and the referee counted him out. Molinares was declared the new champion by knock out. However, the decision was later changed to a no contest but the Colombian kept the title.

In 1989, Starling knocked out Lloyd Honeyghan to win the WBC welterweight titles. The following year, Starling challenged Michael Nunn for the IBF middleweight title, but lost by decision.[3] In his next fight, Starling lost his welterweight titles on a close decision to Maurice Blocker. That was Starling’s last fight. He retired with a record of 45-6-1-1 (27 KOs).